Tuning the Glock Follower to Work With TF Mag Extensions

that's usually related to the overall length of the ammunition being too long for the extension. We're usually able to load ammo out to about 1.135/1.140" with round-nose bullets, but to be safe we tell people to load ammo at 1.125" (which is pretty short). Fiocchi 124's are loaded to 1.125", and we usually have great luck with Federal Syntech.

If you're running Winchester White Box (for example) that stuff is WAY long, 1.160" overall, and will drag on the front/back walls of the extension going in.

Most 147-grain loads are long, and often have a square-corner profile that makes them even longer when tipped at an angle

Sounds like the ammo is dragging. Check your ammo length -- ideally we want you to be running ammo that's right at 1.125" . We make the extensions slightly undersize to help offset some of the oddities designed into the Glock magazine.

Winchester white box, for example, is very long (1.160") -- long enough to rub against the front wall of the magazine extension and cause jams -- until the ammo clears the extension, and then everything runs fine.

There is some variation in the mag tubes. Some take everything, some only run with short ammo, and others won't run with an extension at all. (Just had that situation again today.) Problem is, the mags look identical That's why we suggest the short ammo. Better odds of success.

Hollow points behave as though they were longer than they are. Give yours a try and see if they work. If not, I will buy the basepads back.

If possible, try them on more than one magazine. Irritating as that is, they really are different.

1.125 is ideal. My personal ammo is 1.135. Above that results become variable. At 1.160 (Winchester White Box) -- that's pretty much a guaranteed fail. Many people have good luck (including Josh Froelich, No. 2 PCC shooter in the country) with Federal Syntech's PCC loads, which run around 1.145.

It's an overall length issue.

We've shortened the interior of the extension slightly to deal with problems caused by a quirky feature on Glock 9mm mags (long story). To get reliable function in 9mm, we suggest people keep their ammo down around 1.125 OAL. My personal ammo runs at 1.135, and I've run stuff out to 1.147 in some mags, but Winchester White Box (at 1.160) pretty much never works -- and creates the sort of malfunction you're showing me here.

DETAIL: Hollowpoints act like they're longer than they are, which is why we use the 1.125" standard. A RN bullet can be loaded longer (as above).

If you NEED to get longer-loaded ammo to work (such as loading major power factor ammo for USPSA competition), I suggest using our 170mm extension for the .40. It is cut longer and wider internally, and GENERALLY works just fine with 9mm, so long as you round the sharp nose off of the follower.

FWIW: we don't recommend ACS (non-Glock-brand) magazines. Our experience has been that those mags work fine by themselves, but they're different enough from a normal Glock mag that the little differences become problematic. Some of them work fine, others don't. Glock mags vary too, but we seem to have better luck with them.

What has happened is the bottom lip of the magazine has caught on the top lip of the cutout in the extension's back plate during assembly. 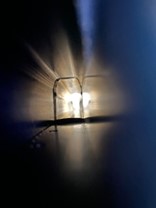 The bottom portion of the magazine has been crushed forward, creating the protrusion you see in the photo. (Goliath crushing rear wall.jpg, by Alan Schneider)

Take the mag back apart and re-condition the bottom-rear-most portion of the mag as best you can, returning it to its original shape. (The polymer in Glock mags has some memory, so with a little work it should come back to more-or-less normal.)

When you re-assemble it, put the top of the back plate on first, making certain that the protruding rear portion of the mag fits into the corresponding cutout.

Before you tighten the screws. look up inside the mag and double-check. You should see a smooth wall all the way up the back of the mag tube.

I didn't notice where you got this mag, but there was a tech at Glockstore that was assembling them for customers as a pre-fab kit (and doing it wrong) -- he/she crushed a bunch of mags in the process.